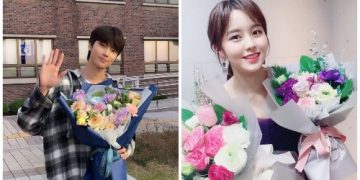 The Korean entertainment industry is increasingly witnessing the appearance of many young, talented and beautiful faces. One-time child stars Kim So Hyun and Hwang In Yeop are two names that attract attention today thanks to achieving new milestones in their careers.

August 5 marks Hwang In Yeop’s 1000th day since debut. It was a very special day not only for the male star born in 1991 but also for his fans. On August 5, 2021, Hwang In Yeop also officially reached 10 million followers on Instagram, which is an impressive achievement and says a lot about the incredible fan base that the actor has.

Recently, Hwang In Yeop was confirmed to star in the upcoming film The Sound Of Magic with Ji Chang Wook and is in talks to star in Why Oh SooJae, if accepted, he will star alongside Seo Hyun Jin .

Kim So Hyun celebrates 13 years in the entertainment industry

On August 6, Kim So Hyun shared on her personal Instagram a photo of the flowers, balloons, and gifts she received from fans, on the 13th anniversary of her career in the industry. entertain. The Love Alarm star captioned:

“It’s been 13 years since I started working hard!”

Kim So Hyun continued to express her gratitude to all those who have supported her during her 13 years and assured fans that she will continue to work hard in the future. The beauty confided:

Thank you very much. I will always support and love fans. I will continue to work hard to become a good actor in the future. I love you guys.

Kim So Hyun is one of the Korean stars who have been acting since the age of 8. She made her acting debut in the drama Que Sera Sera (2007) and played the role of young Han Eun Soo (Jung Yu Mi). Since then, Kim So Hyun has received various projects. Through her years in the acting industry, the Radio Romance star has honed her skills in front of the camera.

From supporting roles, Kim So Hyun has gained a foothold in the entertainment industry and is now known as one of the versatile young actresses of the entertainment industry. She has completed projects in which she starred such as Who Are You: School 2015, Bring it on, Ghost, The Emperor: Owner of the Mask, Radio Romance, The Tale of Nokdu, Love Alarm and Korean dramas Latest Country River Where the Moon Rises.

For lovekpop95, the 22-year-old actress has established her identity and gained a following around the globe. She continues to impress the public with her amazing acting skills.