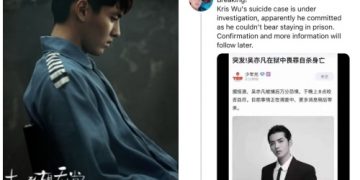 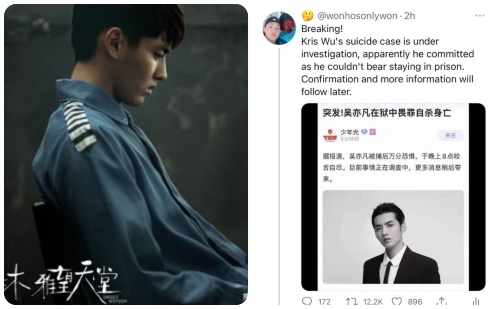 Recently, former EXO member, Kris Wu is the focus of Asian media when he is currently being detained by Beijing police pending investigation into his private life scandal.

Referring to deleted tweet. Please read properly. I deleted it for it to not cause anymore misunderstanding, but I stated it's not confirmed and also that he "apparently" committed. I'm sorry for the confusion but PLEASE READ, it's not my responsibility to answer EVERY qrt https://t.co/mBDZEOIlKB pic.twitter.com/iPn2vAl7vx

This latest rumor is causing a stir online as many people are brought up to discuss whether this new allegation is true or not. The tweet was retweeted thousands of times but was later deleted.

Currently, many netizens are voicing claims that those rumors are untrue and have no real proof. However, the rumor continues to cause a stir and uproar on various social networking platforms and online communities.

tw // kris wu , suicide
can people stop saying that kris wu committed suicide? it's not confirmed and it all started because somebody posted it on twitter, wait for an actual statement made by the idk police or another reliable source before spreading this rumour

Kris wu apparently committed … no he needs to pay for his actions idgaf… if the rumours are true he’s defo guilty pic.twitter.com/jv6VvluBbP

Kris wu is not dead apparently (according to my friend in China) pic.twitter.com/9pGeyavV58