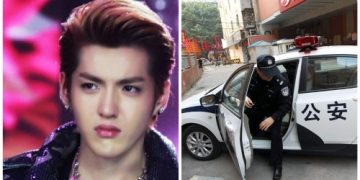 The news that Kris Wu was detained attracted great attention in Chinese public opinion on the evening of July 31. Management agencies, government media channels and the audience demand a thorough investigation of the case and severely punish the male singer’s behavior.

The QQ site announced more details related to the arrest of Kris Wu.

According to QQ, Kris Wu was arrested by the police on July 29. The functional forces decided to conduct everything in silence to avoid mass gatherings, creating chaos. During the process of being escorted to detention, the former EXO member broke down, constantly crying for help from the management company and asking for leniency.

The newspaper said that the police had found evidence that the male singer had an affair with a 14-year-old female fan in Shanghai (China). After that, the authorities searched his home and company and summoned all his employees to investigate.

According to QQ, Kris Wu’s side deleted a lot of evidence, including the history of messages between them and the girls to cover up the incident. After that, the police restored the whole thing and discovered many contents referring to contacting, booking, and finding underage girls between the 31-year-old star and her subordinates.

Not only that, in the phones of many of Kris Wu’s employees, the police also found a video of the girls being taken into the hotel room, Kris Wu’s private house in an unconscious state. The male artist’s suspicion investigation team recorded a clip on the one hand to control and threaten the girls, and on the other hand to use it to grasp the corner of the eye and prevent Kris Wu from turning around.

According to QQ, Kris Wu bowed his head to confess. In addition, he also confessed that his accomplices are many artists in showbiz. The identity of the first two people revealed to belong to the hip-hop world is that PWB – who was on the show with him and WW – is Taiwanese.