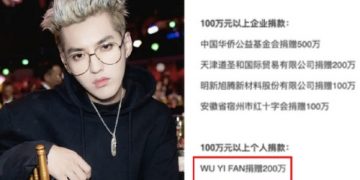 So after much speculation, Kris Wu was finally arrested by the police after the scandal of bringing young girls into the hotel. This shocking information made the whole Chinese entertainment industry excited.

In another development, the Sohu page on the afternoon of July 31 had an article sharing information that the Zhengzhou Red Cross Society (Henan, China – the place hardest hit by the severe flood) had notify the amount received from benefactors, donation organizations. Notably, in this list, there is a name WU YI FAN who donated 2 million yuan. 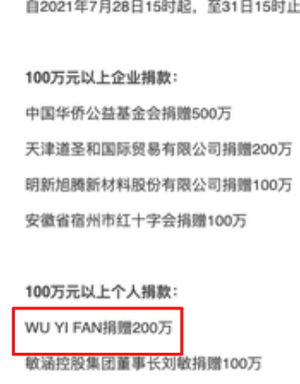 This detail makes many people think of Kris Wu – who also has the same transliterated name as WU YI FAN, Especially in a campaign that forgot to donate in 2018 the male singer also used this name to donate. If the male singer really donates, the total amount of Kris Wu’s side sent to the Zhengzhou flood and storm support fund will reach 3 million yuan (500,000 USD) – including 1 million yuan in the name of the previous company. ever donated.

Many neitzens expressed that, before being arrested and investigated, it is likely that Kris Wu tried to do a good deed to save the crumbling image.
Source: Sohu