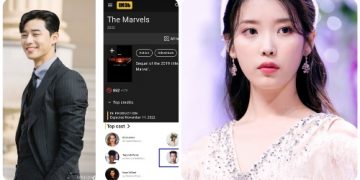 On the morning of July 30, actor Park Seo Joon’s fans were delighted to hear that he was officially confirmed to participate in the blockbuster Captain Marvel 2.
Park Seo Joon has now joined Claudia Kim and Ma Dong Suk as the third Korean actor to join the Marvel Cinematic Universe. Meanwhile, in the upcoming ‘Captain Marvel’ sequel film ‘The Marvels’, Captain Marvel will work alongside fellow heroes such as Monica Rambeau and Ms. Marvel. Previously, some media outlets raised suspicions that Park Seo Joon may take on the role of another Marvel hero, Amadeus Cho a.k.a Brawn.
However, his participation in Captain Marvel 2 will also cause the filming schedule to conflict with the filming of the movie ‘Dream’ that he co-starred with female singer IU.

‘Dream’ is a project that requires overseas filming, but this was not possible due to an overlapping of schedules of about ten major actors, including IU and Park Seo Joon, and the current situation with COVID-19. Thus, while the ‘Dream’ team already completed filming in Korea, they will postpone their overseas filming to next year.

Meanwhile, Park Seo Joon plans to film for ‘Captain Marvel 2’ in the United States during the second half of this year, film the overseas scenes for ‘Dream’, and then begin filming for the drama ‘Gyeongseong Creature’. IU, on the other hand, recently completed filming for her movie ‘Broker’ back in June.