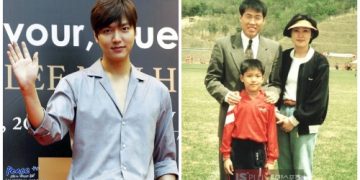 Lee Min Ho is an A-list superstar in Korea, he is one of the stars with millions of fans, especially fans in the international market.
Therefore, it is understandable that fans always want to know about Lee Min Ho’s daily life and especially information related to his parents.
Recently there was information on Cyworld that Lee Min Ho’s father is a real estate millionaire in Korea, so is that true?

Because Lee Min Ho is a celebrity that never reveals facts about his family, her parents’ names are unknown. Lee Min Ho’s father is a business man who doesn’t like publicity, so he doesn’t show up himself.
However, it can be affirmed that his parents are definitely a millionaire in real estate in Korea. Because in 2017, Lee Min Ho is said to have bought his parents a luxury villa worth $3.4 million. His parents’ official business remains a mystery.
He has an older sister named Lee Yun Jeong, and she works in the entertainment field as well.

She is currently one of the CEOs of MYM Entertainment, her younger brother’s agency. It is believed that “The Heirs” actor only has one sibling.

His mom narrated that when Lee Min Ho was a toddler, he is only slightly taller compared to other children his age, and he doesn’t eat a lot. He started to speak 3-4 months earlier than an average child, so he was already talkative at a young age but shy.