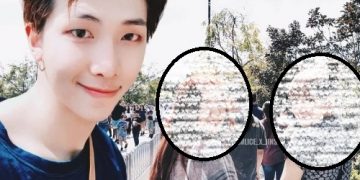 You may not know that RM of BTS once opened up about his high school relationship. The rapper revealed the reason they broke up.

BTS members have chosen to speak very little about their relationships so very few people can know about it. However, there was a moment when BTS leader RM candidly shared about the relationship he had when he was in high school.

In 2015, RM appeared on a popular Korean TV show, Problematic Men, in which he was asked about his past relationship. RM confessed that they are two different people and don’t get along.

“There was a girl that I dated in high school, 4-5 years ago. A relationship is something that you can’t really define. But, to put it into perspective, it is as if a circle and a triangle trying to become a square and we didn’t match well in that process,” he said.

RM added, “She had a lot of guy friends. To be honest, having a lot of guy friends isn’t a problem. But, in my circumstances and from my point of view, she did things that were unacceptable as a girlfriend. And, so we continued to argue. And if things continue like this, I figured this would have an effect on my pure feelings for her. So we ended things.”