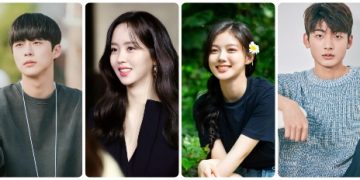 K-Drama is very popular nowadays , and as an avid fan of k-drama we tend to love and adore the portrayal of every actor especially when it comes to their natural yet impressive acting skill. Being a kdrama lover also means you already know and familiar with a lot of popular actors/actress including some rising actors. These 5 male actors and 8 actresses who were born in 1988 are actually popular for capturing the hearts of the viewer as well as having a bright future in their career as Korean actor.

Lee Jaewook started his acting career in his small role in ‘Memories of Alhambra.’ He then received much love from his dramas ‘Search: WWW’ and ‘Extraordinary You.’

Lee Shinyoung become popular through his small role in tvN’d drama ‘Crash Landing on You.’ Despite having a quite small role he managed to steal the hearts of the viewer thanks to his acting skills and shining visual.

Bae Inhyuk gain a lot of fans from his web drama ‘XX,’ playing alongside Ahn Hani. A lot of his fans including netizens are looking forward and anticipate for his future drama project.The article is based on the author’s point of view from lovekpop95!

Oh Jaemoo made his acting debut when he was only 13 years old through KBS’ drama ‘Bread, Love, and Dreams.’ Many of his fans hope to see him again for his grand comeback on the small screen.

Seo Young Joo made his acting debut in 2011 through MBC’s ‘Listen to My Heart.’ He has been involved in various dramas, films, and theatrical plays.

Korean Actresses that were born in 1999 are stunningly beautiful and talented actresses. Aside from their visuals they also received plenty of support and love from fans, thanks to their sweet personality and successful drama series. Some of the Actress included within the list are currently having their own drama series and some are also part of successful K-Pop Girl Group.The article is based on the author’s point of view from lovekpop95!

So let’s get to know the 8 Popular Korean Actresses that were born in 1999 along with the drama series that they starred in :

Kim Yoo Jung was born on September 2, 1999 , she is currently working for a new historical fantasy drama “ Red Sky” that’s scheduled to premiere in fall 2021.

Jin Ji Hee was born on March 25, 1999 , her latest drama series “ Penthouse War in Life Season 2” began to air last February 19, 2021 where she plays as Yoo Jenny.The article is based on the author’s point of view from lovekpop95!

Lee Na Eun was born on May 5, 1999 , she is a part of Kpop Girl Group APRIL and also  best known for her role in Extraordinary You as Yeo Joo Da.

Kang Mina was born on December 4 , 1999 , she is a former member of Kpop Girl Group I.O.I and Gugudan. She is also best known for her role within the drama series “Hotel Del Luna” as Yoo-na.The article is based on the author’s point of view from lovekpop95!

Kim Doyeon was born on December 4, 1999 , she is a former member of Kpop Girl Group I.O.I. and a member of Weki Meki under Fantagio Entertainment. She recently appeared within the drama series Pop Out Boy! as Han Sun Nyeo.

Kim So Hye was born on July 19, 1999 , she is a former member of Kpop Girl Group I.O.I  and recently led within the drama series “ How to Buy a Friend” as Uhm Se Yoon.

Jo Soo-Min was born on March 5 , 1999 , she recently appeared on drama series “Penthouse: War in Life Season 1” as Min Seol-Ah and Royal Secret Agent as Kang Soon-Ae.The article is based on the author’s point of view from lovekpop95!

We can’t deny the fact that all these Korean Actresses that were born in the year 1999 are equally born to be beautiful and talented. Let’s continue to support them by watching their new and upcoming drama series this year 2021.