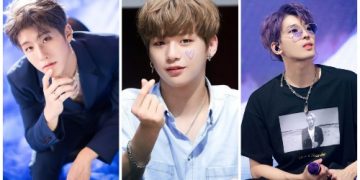 K-Pop idols are known for their top-tier visuals and talents, but it seems 1996 was an especially iconic year for idols! Earlier, we looked at 12 Male Kpop Idols Born in 1997 Are The Kings Of 97 Line In The Kimchi Entertainment Industry; 19 Male Kpop Idols Born in 2000 Dominating the Korean Entertainment Industry, now here are 10+ male idols born in the year 1996 that are constantly sweeping everyone off their feet with their incredible visuals and talents!

Kang Daniel participated in the survival show Produce 101, and ultimately finished in first place as the overall winner of the show! He then debuted as the centre and main dancer of Wanna One in 2017, and fans loved his cute visuals and fun personality when he was a part of the group. When Wanna One ceased their promotions, he debuted as a solo artist in 2019, and fans are in awe of his talent once more!

Monsta X was formed by the survival show NO MERCY, and I.M. was a member who joined the show midway, ultimately among it into he group as their lead rapper. Fans love his hilarious personality, and are especially appreciative of his terrific rap skills that has helped establish Monsta X as an incredible hip hop group!

ASTRO‘s JinJin debuted as the leader and main rapper of the group in 2016. he leads the group well, and fans love him for his warm and caring personality, incredible talent and adorable visuals!

PENTAGON‘s Yeo One debuted as the lead vocalist of the group in 2016, and his sweet vocals blend in well with he power vocals of his fellow vocalists! Fans love him for his handsome visuals, vocal color and kind personality!

A.C.E‘s Byeongkwan has participated in lots of survival shows, such as K-Pop Star and MIXNINE! He finally debuted as the group’s main dancer in 2017, and fans are glad that he did! he brings to the team is beautiful visuals, smooth dancing abilities and a hilarious personality that makes everyone have a good laugh!

SEVENTEEN is known for their amazing rap line, and Wonwoo is one of the reasons they’re so amazing! He has incredible skills and control over his rap, and fans love his warm personality and handsome visuals!

Kim Jaehwan participated in Produce 101, and made it into the final lineup of the group that would form Wanna One. He debuted as the group’s main vocalist, and fans loved his hilarious personality when he was part of the group! After the conclusion of Wanna One’s promotions, he re-debuted as a solo artist, and fas have been loving all the music he’s been delivering so far!

NCT 127‘s Doyoung debuted as the main vocalist of NCT U in 2016, and was later added to NCT 127 in 2017 with the goop’s “Limitless” comeback. He’s known for his honey vocals and bunny visuals, and is well-loved for his kind and warm personality, especially towards his members!

UP10TION‘s Kim Wooseok debuted as the group’s visual and vocalist in 2015, and later participated on Produce X 101 in 2019. He made it into the final lineup for X1, and promoted with them until their untimely disbandment in early 2020. Kim Wooseok is loved for his incredible talent and top-tier visuals, and has an adorable personality to boot!

SEVENTEEN‘s Jun is part of the group’s dance line, and absolutely kills it as one of their lead dancers! Along with his incredible talent, fans love him for his superior visuals (he’s also known to resemble Super Junior‘s Heechul!) and his very kind personality!

Ten debuted as the main dancer of NCT U in 2016, and was later added to WayV as their main dancer in 2019. He’s a phenomenal dancer, and has a high, nice vocal color that compliments his group’s songs’ nicely! Ten is loved for his super savage personality and gorgeous visuals, and is also the first Thai idol to debut under SM Entertainment!

Holland debuted in 2018 as the first openly gay K-Pop idol in history, and has spoken multiple times about his passion for fighting for LGBT rights. He has a unique vocal color that is amplified with the messages of his music, and fans love him for his music, sweet personality and tendency to defy traditional standards of the meaning of K-Pop!

SEVENTEEN’s Hoshi debuted as the main dancer and leader of the dance team in SEVENTEEN, and forms an integral part of the group! He aids in making most of the group’s choreographies, and fans are on awe of his immense talent, adorable visuals and cute personality as well!

PENTAGON‘s Yanan is the group’s visual and vocalist, and has a nice, high tone that contributes to the diversity of PENTAGON’s music! Fans also love his quiet and kind personality, and love how he gets better with every comeback!

SEVENTEEN’s Woozi debuted as the lead vocalist and leader of SEVENTEEN’s vocal team, and is the reason for SEVENTEEN’s distinct musical style! He produces most of the group’s music, and fans are incredibly grateful for his talent and calm personality that helps keep the group grounded!

WayV‘s Kun was originally part of the Chinese version of NCT U‘s debut song “Without You” in 2016, but made his official debut as the leader of WayV in 2019. He’s loved for his prince-like visuals, kind personality and incredible vocals!

AKMU‘s Chanhyuk, along with his sister, won the survival show K-Pop Star Season 2 in 2013, and subsequently signed a contract with YG Entertainment a month later. They debuted in 2014, with Chanhyuk taking the position of main rapper and lead vocalist, and also produces all of the group’s songs! Fans love his immense talent at singing and composing, and also love his kind personality as well!

GOT7‘s Youngjae debuted as the group’s main vocalist after only 7 months of training, and fans are so glad he did! He gives GOT7 a unique sound, and fans also love his funny and kind personality, as well as his work ethic!