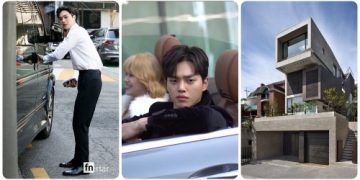 How Rich Is Song Kang? Song Kang Dating Status, which pretty girl is he dating?
Song Kang has been rising in the Korean film industry with his remarkable K-dramas and his stunning looks also make fan girls flutter.

In 2017, his debut in “The Liar and His Lover” fans witnessed the actor blossoming wonderfully with his first lead role in “Love Alarm”.

Kbiz today: Song Kang updated a new photos making netizens think that he and Han So Hee are really a real couple.

In just four years in the industry, the “Nevertheless” star has captivated the hearts of domestic and international fans with his signature performances in “Love Alarm 2” and “Sweet Home”, making him the ” Netflix’s child”. ”

As he turns 27, here’s everything you need to know about Song Kang, including his dating history.

Multiple reports previously revealed that Song Kang has not been rumored to be dating anyone and has not shared much about his past relationship.

Interestingly, he revealed to Singles magazine his ideal type, which he describes as someone who is charming and has a warm aura.

“Rather than their appearance, I look at their individual charms. But I do like people who have warm images or auras.”

Moreover, he is also the type who can fall in love at first sight but revealed that he couldn’t confess his feelings right away.
Song Kang remains relatively discreet when it comes to his love life. Regardless of his marital status, we are rooting for his.
How Rich Is Song Kang?

Just a rising star, but Song Kang also owns a huge fortune at the age of 27.
With his lineup of dramas, endorsements, and deals, it is safe to say that the 27-year-old actor has earned a ton of money.

According to kdramastars , Song Kang’s net worth is reportedly about $20 million with acting as his major source of income.

Aside from this, he has landed several lucrative deals from supplements, food and beverage, and beauty endorsements. This includes KGC Everytime, Benefit, Chilsung Cider, and Banila Co.