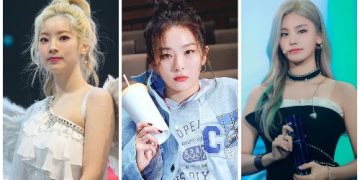 Members of ITZY, IZONE, Twice, and Red Velvet were boasted by plastic surgeons for having beautiful eyes.

Recently, famous Korean plastic surgeon Philip Son named Kpop beauties with the most beautiful single and double eyelids. Those are all familiar names on Korean beauty charts.
Today we will take a look at Top 3 K-Pop Female Idols With Best Single Eyelid According To Plastic Surgeons.
1.ITZY’s Yeji
According to Dr. Phillip Son’s analysis, Yeji’s eyes are not completely monolids but like double eyelids, but the eyelid line is very blurred. Beauty ITZY is famous for her cat eyes, the luxurious aura of a supermodel.

Ever since her debut, ITZY beauties have focused on eye makeup, creating special highlights. Yeji is the face that suits fashion advertising the most in the group.
2. Twice’s Dahyun
Dahyun’s special feature is that even though he has clear monolid eyes, his eyes are big and round. The plastic surgeon pointed out that the female idol’s eye pupils are large and bright, while the eyelid folds are also very beautiful.

The Twice member has an image reminiscent of a lovely squirrel, a pair of big round pairs that many people don’t recognize the female idol with monolid eyes.

When going on stage, Dahyun only needed to stick an eyelid patch to have a natural double eyelid, but her unique monolid eyes became the highlight.

3. Red Velvet’s Seulgi
Referring to idols with beautiful monolids, Seulgi cannot be ignored. The Red Velvet member is the only female idol of SM with monolids and is one of the most popular visuals in the company.

Although she has only one eyelid, Seulgi’s eyes are very big and round, not inferior to other idols with double eyelids.

Her single eyelids help Seulgi exude a girl-crush personality, the coldness of a girlcrush, but in fact she is extremely cute, with cute smiling eyes.