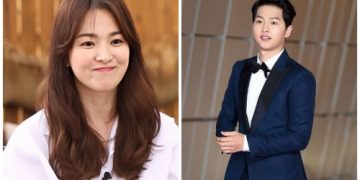 Song Hye Kyo – Song Joong Ki has been divorced for nearly 2 years, but the information about the couple still attracts the attention of many netizens.
Not only that, the attraction of the couple has not decreased, there are still many fans who love this couple.
You can surf on facebook and you will see that there are hundreds of groups set up to update and support all activities of the Song-Song couple and there are hundreds of thousands of fans who are members of those groups.
They still hope that there will be a day when Song Hye Kyo – Song Joong Ki will have a chance to reunite!
Speaking of marriage and relationships during an interview with local Korean fashion magazine ‘W, Song Hye-kyo revealed that she is very sentimental when it comes to love and gets deeply affected. “I devote myself fully to a relationship and never turn back when it is over,” said the actress, as reported. “If it doesn’t work out, nevertheless (I devoted myself to it), it’s just a relationship that will never work,” she added.

Her perspective is not very difficult to see; in fact it is very common. Maintaining any kind of relationship with one’s ex can be really hard for someone who’s sentimental. Every eye contact, hand-shake, words spoken with the person can trigger painful memories of the blissful times spent together. Though some ex-couples do rekindle their relationship, but that’s rare. Most people want to move on with their lives, because it’s the easier way.
“It’s extremely, very unlikely, but many fans are still looking forward to that day.”