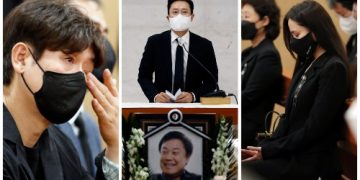 On May 15, the funeral of actor, producer, and president Lee Chun Yeon was solemnly held at the hospital funeral home in Seocho District, Seoul. Not only behind the hit series, he also holds the position of President of the Association of Korean Filmmakers and is respected by many juniors.

The whole cast of famous and powerful artists such as Son Ye Jin, Lee Byung Hun, Kim Gyu Ri, Kim Ok Bin… came early to attend the ceremony to pay respects to the late president. The actress wore a mask to ensure the epidemic prevention regulations, but the audience still couldn’t help but feel sorry to see her red and swollen eyes. During the ceremony, the female lead Crash Landing On You and her colleagues could not hold back the tears when they saw the teacher of the Korean film industry pass away forever. Actor Lee Byung Hun, actress Kim Gyu Ri, director Lee Joon Ik all choked up with emotion and grief when speaking at the farewell ceremony for producer Lee Chun Yeon.