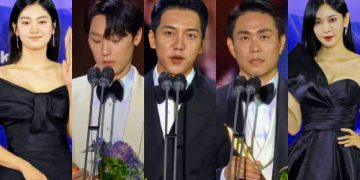 On May 13, The 57th Baeksang Arts Awards was held and a lot of stunning nominees attended for this year’s greatest achievements in television , film , and theater.

The awards night was held without an audience at the KINTEX Hall in Ilsan. The MC’s for this year’s ceremony is none other than Bae Suzy and Shin Dong Yup , who also host the show for fourth consecutive years.

Baeksang Play Award: We Are (Not) a Joke (literal translation)
Best Actor: Choi Soon Jin – We are [Not] a Joke”
Best Actress: Lee Bong Ryeon – Hamlet

JTBC’s Beyond Evil took home both Best Drama and Best Screenplay, and its star Shin Ha Kyun also received the award for Best Actor in the television category. Kim So Yeon, the star of SBS’s popular drama “The Penthouse,” took home the prize for Best Actress.

For the film category, Yoo Ah In won Best Actor for “Voice of Silence,” while Jeon Jong Seo won Best Actress for “The Call.”

Congratulations to this year’s winners!