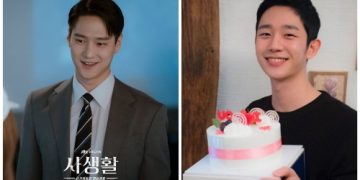 On May 10, Go Kyung Pyo thanked actor Jung Hae In for his support.
Specifically, he uploaded on his Instagram page the photos of the coffee truck that Jung Hae In sent and wrote:
“What a precious friendship! Thanks, hyung! I feel encouraged.”

The horizontal banner of the coffee truck reads, “I support the ‘6/45’ team!” The banner next to the truck contains a photo of Go Kyung Pyo in his military uniform, and in a manner of speaking used in the army, the sign reads, “Sergeant Go Kyung Pyo, drink this homemade coffee and cheer up.”
Actor Go Kyung Pyo is in the process of filming the movie “6/45”. This will be a film telling the story of a soldier in the Korean army on duty at the border.