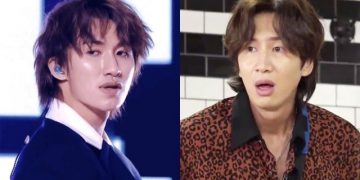 Immediately after Lee Kwang Soo confirmed his left from ‘Running Man’, fans expressed their sorrow because Lee Kwang Soo really became the soul of this show.
“This is really a sad news. Among the cast Lee Kwang Soo is probably, for me, one of the most fun, I’d put him in the top 3. But I guess 11 years is really such a long time already. He probably really needs also to focus on his acting career as well. Lee Kwang Soo will be a presence in Running Man that will surely be missed!”
“Literally wth? I just started watching rm again this week and my fav is leaving? Of course I’m worried for his health and well being and want the best for him and he also most likely will marry soon so he has to prepare and be healthy but it still saddens me a lot. Of course I love rm for their family chemistry and all the members but kwangsoo is just special with his cheating and great acting and being a comedian with jaesuk always making fun of him. Rm won’t be the same without kwangsoo. I don’t want to say it but it truly is the end of RM then. They can’t survive without one of their most Important and loved member. I really don’t want to watch the last episode with him.”
“Sometimes I forget he’s an actor. I’m so used to him being a variety star/comedian. I hope he gets more acting roles.”
“This is really sad. I feel without him, they are going to try and cancel the show. Pls don’t. Anyway thank you LKS for your hard work and dedication over the years. I know it must have been really hard for him to come to this decision. I hope he gets better.”
“It’s sad that Kwang Soo is leaving😭I think They should end the show gracefully while they are still at the top.. we all know that the golden age of running man have passed.. sometimes u can even see the members are getting restless and getting old. Recent episodes they have to use the same old joke on seokjin that I really kind of feel bad about the jokes on him. Rather than ending this show with pathetic ratings, why not just end it now gracefully🥲 anyway, the last ep with Kwang Soo will be so sad”

On the morning of April 27, Actor Lee Kwang Soo’s agency, King Kong by Starship, confirmed in a press statement:

“We notify that Lee Kwang Soo will be leaving the cast of SBS’s ‘Running Man’ after his final recording on May 24.

After becoming involved in his car accident last year, Lee Kwang Soo has received regular physical therapy; despite the continued treatment, there were times when he felt that it was difficult to maintain top physical condition during ‘Running Man’ filmings. As a result, Lee Kwang Soo held lengthy conversations with the production staff, crew, his fellow cast members, as well as the agency, and ultimately arrived at the conclusion that he needed time to recuperate, both physically and mentally.

Because it is a program that Lee Kwang Soo called his home for the past 11 years, it was difficult for him to come to this decision. However, it was inevitable when considering his intention to show viewers a better image in the future.

We sincerely thank all of the viewers for the love they showed Lee Kwang Soo on ‘Running Man’, and Lee Kwang Soo promises to greet you all again with a bright and healthy image.”