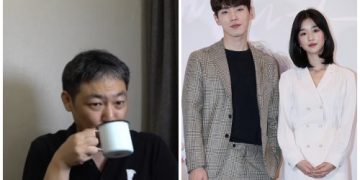 KBS reporter Kim Yong Ho once had a talk with fans about Seo Ye Ji’s role in ‘It’s Okay to Not Be Okay’ in 2020 and there were many revelations about her love affair. However, at that time few people paid attention to this issue, so far when the Kim Jung Hyun scandal emerged, many fans watched this talk by male entertainment reporter Kim Yong Ho.

The reporter started by saying, “Seo Ye Ji is an amazing woman,” then continued to say that there’s something weird about celebrities who have a grand story of how they became a celebrity or have some amazing back story.

Kim Yong Ho stated that when he talked to the staff members who worked with Seo Ye Ji, many stated that Seo Ye Ji’s real personality is very close to the character she played from the drama ‘It’s Okay to Not Be Okay.’ He said, “Seo Ye Ji is the type of person who needs to be the center of attention and needs to be treated like a queen. And people say that the character that she portrays is actually close to her actual image.”

Reporter Kim Yong Ho continued to say, “So Seo Ye Ji almost entices men with her charms, almost dominates them. You’d understand if you watched ‘It’s Okay to Not Be Okay.’ One of the episodes I heard is that she would call her boyfriend and just yells ‘Fire!’ and hangs up. So the boyfriend would get surprised and run over to her. When they arrive, she’s perfectly fine. But she would ask why it took them so long to get to her after hearing her scream. ”

KBS reporter Kim Yong Ho believes that some characters are suitable for actors because of the similarities between the actors’ personalities and characters. Therefore, the reporter that Seo Ye Ji must have the character of the movie ‘It’s Okay to Not Be Okay.’