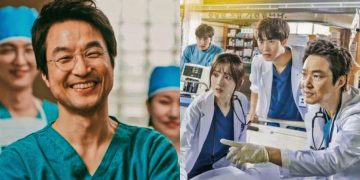 Can’t wait for the 3rd Season of Dr. Romantic!

Can’t wait for the 3rd Season of Dr. Romantic!

Recently (on April 8) , according to one netizen, the season 3 for the popular SBS Drama ‘Dr. Romantic’ will be coming soon. The netizen met the actor Han Sukkyu, who played the role as Dr. Boo Yong Joo in the hit drama series Dr. Romantic. The netizen also uploaded a photo of actor Han Sukkyu giving them his signature and shared their experience and story of meeting the popular actor personally.

The netizen wrote, “He looks neat and so friendly. He is very cool. He gave me a sign before he left. And he said that the filming for season 3 of the ‘Dr. Romantic’ will begin this November. I think it’s good news for people who have waited long for the drama.”

So its official, SBS Drama “Dr. Romantic” is already preparing for its new upcoming season and will start filming this coming November.

Are you also excited for the upcoming season 3 of Dr. Romantic? Let us know!

For more k-news and k-updates  consistently open your tabs here on LOVEKPOP95 to be updated everyday!