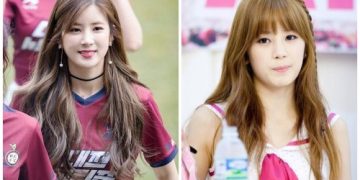 The victim suddenly released a recording to clarify the controversy about A Pink’s Chorong’s bullying.

Recently, Chorong was dragged into scandal when her student past was revealed. She was accused by a former classmate of a hooligan at her school, her agency Play M Entertainment denied. But then she apologized for drinking underage but denied allegations of bullying via her Instagram.
On April 7th, the first accuser revealed a recorded phone call with Chorong to a media outlet. Below is the revealed part of the conversation, organized chronologically.

Chorong: I didn’t do things to you without any reason.

Former classmate ‘A’: With or without reason that was plainly wrong. Did I do anything wrong to you? I went to the police after I was beaten up by you. But then my friend told me to let it slide because you were drunk then.

Chorong: Well this had to be addressed back then. There was a misunderstanding just as you told me via DM’s. Anyway, I should have addressed this with you back then but I was a little mad about the situation.

A: No but why? Tell me. What was the reason? Why were you mad at me?

Chorong: Just as you said in the DM, I had a crush on someone back then.

A: Oh, yeah. But he went out with me. Maybe you were a little upset because of that but I still don’t understand. As far as I remember one of your friends just came to me and said “Chorong said she has to beat you up”. When I came to see you that day, you slapped me across my face and kicked me in my shins. I and my classmate sitting next to me still remember my bruised legs to this day. Honestly, if you were in my shoes, would you still simply let go of such traumatic memories?

Chorong: No, I won’t forget.

A: To be honest, I’m still shaking now as I talk about this. Will you still be fine if your future daughter went through the same thing as I did?

A: Frankly speaking, I was too weak back then. I was small and frail. But that traumatized me a little and I suffered even after I went to college. I avoided people, thinking any group of females looking at me were actually hating me. But you wouldn’t know…you wouldn’t know how much I suffered. I used to just look away, trying to ignore A Pink on TV. Now that I’m older, my thoughts have changed. I’m the victim. Why do I have to live like this?

Chorong: I’m sincerely sorry. Well… I really shouldn’t have done such a thing back then. I should have talked it out with you, with or without misunderstanding… but I think I was really upset at that time.
A: Let’s say what has happened has happened. But then, you should have apologized to me if you were to debut as an idol and continue appearing on TV? Right? Because I’m still living with the pain?

Chorong: To be honest with you, everything happened so fast, from the audition to the debut. So you are right that I wasn’t attentive enough to take care of everything.