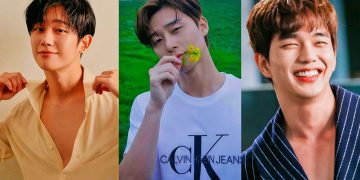 They have finished their mandatory service at early 20's!

A lot of Korean Celebrities wanted to fulfill their military service at the age of 25-30 or early 30’s . The reason behind this is that, as male celebs their first priority is to focus on their career before they leave for about 2 years for their mandatory military enlistment.

But these 7 popular korean actor decided to fulfill their mandatory service at young age before they’ve become a top star, they also started their mandatory duty at early 20’s.

Below are the 7 Popular Korean Actors Who Completed Their Military Service At Early 20’s and Before They Become A Top Star ;

Park Seo Joon decided to fulfill his mandatory duty at the age of 19.

Ryu Jin Yeol completed his mandatory duty before he debuted as an actor. After being discharged from military he started his acting career and become popular for his role in “Reply 1988”.

Jung Hae In completed his mandatory duty before he start his acting career.

Ahn Jae Hyun decided to fulfill his mandatory service on 2012 , it was 3 years after he debuted as an actor. After being discharged he started again his acting career and become popular for his supporting role in “My Love From The Star”.

Yoo Seung Ho debuted as a child actor. He started his mandatory service at the age of 19. After being discharged he become popular for being male lead in different hit drama series.

Yoon Park decided to fulfill his mandatory service when he was in his early 20’s. After being discharged he received a lot of kdrama projects and starred in many popular kdrama.