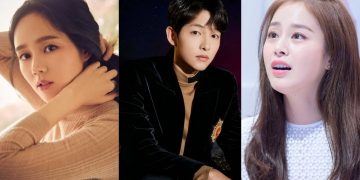 They all have the looks, talents and the brain!

Korean Celebrities are known for their popularity as kpop-idols , actors and actresses. We often idolize them because of their stunning visual, personality and impressive talent/skills whenever we see them on-screen. But these 6 korean celebs are not just popular for their looks and talent but also being one of the smartest celebrities, who scored the highest Korean SAT scores ever!

Here are the 6 Popular Korean Actor/Actress With The Highest SAT Scores;

Rain studied hard during his debut days and achieved around 340~350 in his university entrance exam.

Lim Siwan, an idol and actor who scored 450 over 500 during his university entrance exam and scored 850 for his TOEIC exam.

Song Joong Ki during his high school days was popular for his looks and having an outstanding grades in his report card. He scored 380 in his second entrance exam.

Han Ga In also scored an outstanding result of 384 out of 400 on her university entrance exam.

Kim Tae Hee scored an incredible result  between 385-390 during her university entrance exam. She was also able to get the most competitive majors in Seoul University because of her entrance exam outstanding score.

Is your favorite actor/actress included in the list? Let us know!

For more k-news and k-updates consistently open your tabs for LOVEKPOP95 to be updated everyday!