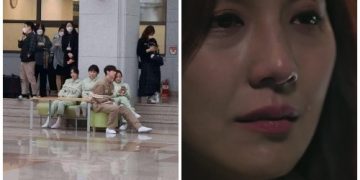 Penthouse 2 is almost at the end of the journey. Only one final episode to be broadcast on April 2 will reveal the temporary end of the cast of characters such as Ju Dan Tae, Cheon Seo Jin, Oh Yoon Hee. The following details made netizens eagerly look forward to searching for information all over the Internet from Instagram cast to the logistics staff of the studio …

The current drama The Penthouse 2 aired its 11th episode on Friday, March 27th. Shim Su Ryeon’s “shocking ending” ended the episode with perfect suspense. In line with ratings, it has secured the # 1 spot among all shows on all channels. It surpassed the Korean Nielsen standard with 26.3% metropolitan area ranking (in second part), 25.2% national ranking (in second part) and 26.9% highest ranking immediately. The viewership rate of 2049, a major indicator of advertising officials, also reached 11.9% (in the second part), demonstrating its considerable popularity.
Episode 11 of Jawawifei’s Friday-Saturday drama “Beyond Evil” shocked viewers by revealing the secrets of the characters behind the central incident. , The viewership ratings for episode 11 recorded 4.7% nationally and 5.4% in the metropolitan area (Nielsen Korea), and continued to react hotly.