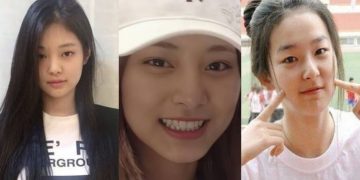 They are still beautiful with or without makeup😍

Korean Celebrities are known for wearing makeup whenever they are on screen , even male celebrities do so. Wearing makeup seems very natural to all korean celebrities , they need makeup in order to hide some of their acne and  face breakouts.

Even though Korean Celebrities are known for having captivating beauty on screen or in real life, it’s still hard to see some of our idols showing off their bareface confidently. Having no makeup on is a big deal to all female celebrities, sometimes they prefer not to reveal their bareface to the public.

In this article we will share with you some female k-pop idols who showed off their bare faces with no worries at all, there is no doubt that they are named as visual queen of kpop with their mesmerizing beauty without or without makeup.

Here are the 12 Popular Female Kpop Idols Who Showed Off Their Bareface Confidently;