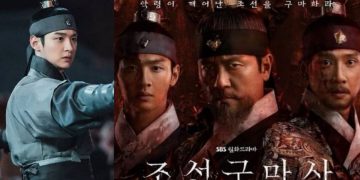 The drama is permanently canceled after just two episodes due to Historical Distortion Controversy.

The new drama “Joseon Exorcist” will no longer air following the drama’s historical inaccuracies and use of Chinese Props controversies.

The first two episodes received a lot of severe criticisms instead of praise from the audience. According to Yonhap News Report , the reason is because of the drama’s historical inaccuracies portrayal,  King Taejong (played by Kwam Woo Sung) murdering his own people and Prince Chungnyung (played by Jang Dong Yoon) , visiting a tavern , drinking Chinese liquor and eating Chinese food (e.g dumplings, century egg and mooncakes)

Due to the drama’s historical inaccuracies, it loses a lot of sponsors and over 20 companies decided to withdraw their advertisements, including big companies such as Samsung ,LG Household , BLACKYAK, Bodyfriend, Ace Bed, Hite Jinro, and KT.

Additionally, about 196,837 Koreans signed a blue house petition to permanently stop the airing of “Joseon Exorcist”. (Based on the website of the Office of President Moon Jae-In)