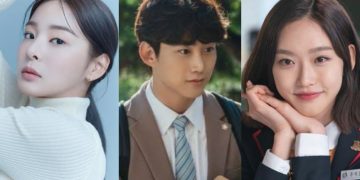 Some kdrama characters became known for their remarkable roles , there are also characters that made viewers dislike and hate them because of their intimidating role as villain. You probably know a lot of villain characters on screen , but did you know that once you get to know them you will eventually describe them as total sweetheart and charming in real life.

Below are the names of Korean Actors/Actress who play as popular villain characters but are actually sweet and charming off screen.

Here are the 7 Popular Villains of K-Drama That are Actually Sweet and Charming in Real Life!

Kim Seo Yeon as Cheon Seo Jin  in hit drama series “Penthouse” , she is known for her intimidating role and creepy expressions but in reality she is a total sweetheart. When you watch the BTS videos of her on “Penthouse” she always showcased her aegyo to co-actor/actress.

Kim Jae Wook as Mo Tae Gu in the hit drama series “Voice” , he is known for his creepy, psychopath character and impressive villainous acting skill. But in reality he is popular for showing off his cute side off screen.

Kim Sung Oh as Lee Son in tvN’s ‘L.U.C.A.: The Beginning” , Kim Sung Oh is known for his creepy facial expressions and beast-like acting. But in a recent interview with Song Ji Hyo and Ma Dong Seok for the film ‘Unstoppable,’ Song Ji Hyo revealed that Kim Sung Oh is super jolly  and  always showcased his aegyo to co-actor/actress.

Lee Hong Nae as Ji Chung Sin in popular drama ‘The Uncanny Counter’, On-screen he is known as  human possessed by an evil spirit, with creepy and terrifying character. But in real life , Lee Hong Nae has a soft personality and according to fans he is an introverted person.

Seol In Ah as Jo Hwa Jin in popular drama ‘Mr. Queen ” , She has a very intimidating role in the drama that made viewers hate her character. But in reality, Seol In Ah has a sense of humor and is full of aegyo.

Ok Taecyeon as Jang Jun Woo in the popular drama series “Vincenzo” , in the drama he is known as the villain boss with a scary and terrifying personality. However in reality ,he is popular as the most beloved male idol in K-pop  because of his caring personality and sense of humor.