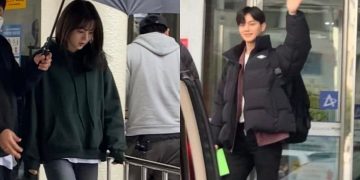 The romance drama “I Know But” is based on the webtoon of the same title. It is one of the most anticipated webtoon-based drama adaptations that will air in the second half of the year.

The drama revolves in the realistic romance of Yoo NaBi ( Han So Hee) and Park Jae Eon (Song Kang).

Recently , photos of the main leads actors filming in the street were trending on different social media sites.

Below are the photos of the main leads spotted filming for their upcoming drama:

Song Kang even has the butterfly tattoo on the back of his neck just like Jae Eon in the webtoon.

Han So Hee also has shorter hair in the drama just like NaBi in the webtoon.

The upcoming drama “I Know But” is expected to air this coming June! Stay tuned!