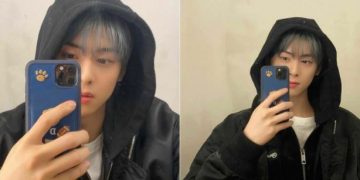 The new haircolor of Cha Eun Woo made the fans especially Arohas become excited about the new comeback of ASTRO this coming April.

Fans think that Cha Eun Woo’s new hair color is a combination and mix of Ash Silver and Blue color. In his last appearance, a couple of days back in the new teaser of “All the Butlers’, Cha Eun Woo  had grayish hair color. In any case, in his latest Instagram post taking a mirror selfie  appeared to be having ash silver-blue hair color  making fans excited and going crazy online, the reason why Cha Eun Woo became trending on Twitter.

The new ash silver-blue hair color additionally is making fans desire to see it highlighted in Astro’s upcoming comeback and new music video , even Arohas are excited for the other members to flaunt and reveal their new hair style and color.

Some fans were wavering about whether his hair is more silver or silver-blue because of the “All the Butlers” teaser video, but the mirror selfie affirms that the hair is without a doubt ash silver-blue color.

What do you think about Cha Eun Woo new haircolor? Let us know!!!