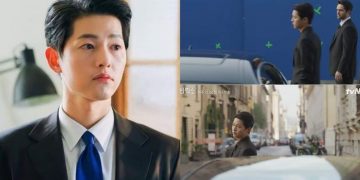 Popular and ongoing kdrama “Vincenzo” released the Behind the Scene for the 1st Episode that made the viewers shocked because of the big difference between the actual set and behind the scene set.

On march 12 , tvN posted on their YouTube Channel the behind the scenes of “Vincenzo” from the first episode. The video revealed that most of the scenes that are supposed to be in Italy are actually Computer Generated Imagery (CGI) known as the application of computer graphics.

A lot of Kdrama fans thought that the actor Song Joong Ki (known as Vincenzo in the drama) filmed all the scenes from the first episode in Italy , but after watching the behind the scenes fans are surprised that the actual set is not actually filmed in Italy but rather it only uses green screen, a visual effects (VFX) technique to be in whatever background images they want behind the actors.

Below are the Actual and Behind Photos from the 1st episode of “Vincenzo” :

Netizens are all amazed on how the production team made it look like they’ve filmed the first episode scenes in Italy, some fans also mentioned that it was “very impressive” and “looks so real”.

tvN Vincenzo is an ongoing drama that airs every saturday and sunday at 9 p.m KST also available on Netflix.