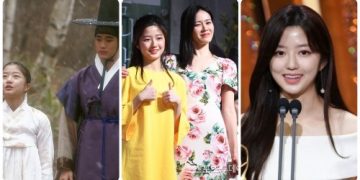 In an impressive series of roles, Bae Ro Na – the daughter of Oh Yoon Hee (Eugene) has received a lot of attention and attention from both the public and the professionals. The character who plays Bae Ro Na is Kim Hyun Soo – the child star of a storm in the Korean thriller Silenced, the rising young star of the Korean screen.

Kim Hyun Soo was born in 2000, soon joined showbiz as a child model. She participated in her first movie when she was only 11 years old with her role in the film about child sexual abuse, pedophilia, causing storms of Korean public opinion – Silenced. Despite being filming for the first time, this child star showed off her natural acting talent and won the Best Supporting Actress award at the 49th Golden Bell Awards.

Before the role of Bae Ro Na in Penthouse, Kim Hyun Soo’s favorite role that fans love most was the childhood role of the character played by Jun Ji Hyun in the blockbuster My Love From the Star. Only 14 years old that year, Kim Hyun Soo excelled in transforming into the little girl Seo Yi Hwa, who had an incomplete relationship with Do Min Joon played by Kim Soo Hyun.

Despite her previous acting experience, Kim Hyun Soo couldn’t help but be shy about filming romantic scenes with a senior 12 years older than her. On a sweet movie, but in real life, the child actress revealed: “I have never loved anyone, so I am quite confused, I have to ask my mother ‘When I like someone, I have to show such eyes. To now, I still do not know what it feels like to be in love. ”

However, Kim Hyun Soo excelled in portraying her character in this drama, and the role that helped Kim Hyun Soo win the Best Young Actress award at the 3rd APAN Star Awards.
Another great role of Kim Hyun Soo is the role of a young Son Ye Jin in the movie Be With You. The innocent beauty and natural acting have helped the child star win a lot of love from the audience.

Famous early and often plays 1-2 movies a year, but not so that Kim Hyun Soo forgets about studying. The child star always works hard to go to school and even makes people admire when in 2018, she was admitted directly to Chung Ang University, majoring in theater and film.
Started acting at the age of 11 and now she is 20 years old, fans have witnessed Kim Hyun Soo maturing for the past 9 years. From an early age, Kim Hyun Soo has been commented to possess a naturally harmonious face. As Kim Hyun Soo grows, the more harmonious the beauty of Kim Hyun Soo, now she has become an extremely beautiful actress and is extremely loved by fans.