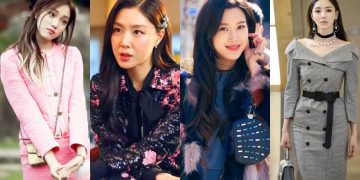 K-Dramas are not just about the powerful cast , story and ost, yet additionally it may very well be the characters that can capture your attention  due to their shocking and solid sense of style.

A great deal of KDrama characters got well known and notable with their remarkable humor, cute, sexy, or one of a kind personality. In any case, for some K-drama fans who love fashion, you presumably notice that the consistently second female lead of the show has a similar vibe particularly with regards to their appearance and personality. The Second Female of the show always seems, by all accounts, to be alluring , costly and exquisite with a  strong sense of fashion style that will certainly catch and steal  your attention.

In this article we will uncover to you the Top 8 Second Female Lead with the Best Fashion Style.

Here are the TOP 8 Second Female Lead Best Known as Fashionista Queen: (in no particular order)

Lee Da Hee as Kang Sara in the popular Romance ,Fantasy and Melodrama “ Beauty Inside”.

Seo Ji Hye as Seo Dan in the popular Romantic Comedy drama  “Crash Landing On You”.

Lee Sung Kyung as Baek In Ha in popular Romantic Comedy drama “Cheese in the Trap”.

Choi Soo Young as Seo Dan Ah in the popular Romance and Sports drama “Run On”.

Which K-drama Second Female Lead is your number one with regards to fashion style? Let us know!!