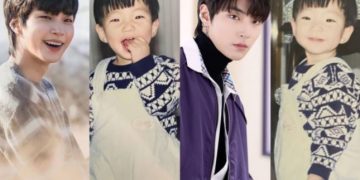 Hwang In Yeop who played the role as Han Seojun in successful drama series” True Beauty” has been continuously receiving  support and attention from the viewers and fans. After the drama ended, Hwang In Yeop became one of the popular rising actors in South Korea.

On March 4 , Actor Hwang In Yeop surprises his fans and followers on Instagram by posting his adorable childhood photos.

Hwang In Yeop instagram update has the caption “아가인엽🧸”

These are the comments that fans posted on his instagram update:

“Hwang In Yeop has been so cute and a fashionista since birth.”

“Omg! Baby in yeop is so cute”

The childhood photos that Hwang In Yeop posted on March 4 become the special day to all the fans because finally they’ve got to see the baby pictures of the actor that look so cute and precious.

Hwang In Yeop childhood photos become the hot topic in social media and receive a lot of positive comments in different social media sites. Majority of the comments are complimenting Hwang In Yeop adorable baby picture and that he still looks so cute and handsome then and until now.