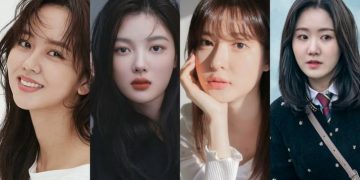 Korean Actresses that were born in 1999 are stunningly beautiful and talented actresses. Aside from their visuals they also received plenty of support and love from fans, thanks to their sweet personality and successful drama series. Some of the Actress included within the list are currently having their own drama series and some are also part of successful K-Pop Girl Group.

So let’s get to know the 8 Popular Korean Actresses that were born in 1999 along with the drama series that they starred in :

Kim Yoo Jung was born on September 2, 1999 , she is currently working for a new historical fantasy drama “ Red Sky” that’s scheduled to premiere in fall 2021.

Lee Na Eun was born on May 5, 1999 , she is a part of Kpop Girl Group APRIL and also  best known for her role in Extraordinary You as Yeo Joo Da.

Kang Mina was born on December 4 , 1999 , she is a former member of Kpop Girl Group I.O.I and Gugudan. She is also best known for her role within the drama series “Hotel Del Luna” as Yoo-na.

Kim Doyeon was born on December 4, 1999 , she is a former member of Kpop Girl Group I.O.I. and a member of Weki Meki under Fantagio Entertainment. She recently appeared within the drama series Pop Out Boy! as Han Sun Nyeo.

Kim So Hye was born on July 19, 1999 , she is a former member of Kpop Girl Group I.O.I  and recently led within the drama series “ How to Buy a Friend” as Uhm Se Yoon.

We can’t deny the fact that all these Korean Actresses that were born in the year 1999 are equally born to be beautiful and talented. Let’s continue to support them by watching their new and upcoming drama series this year 2021.