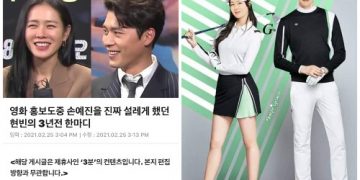 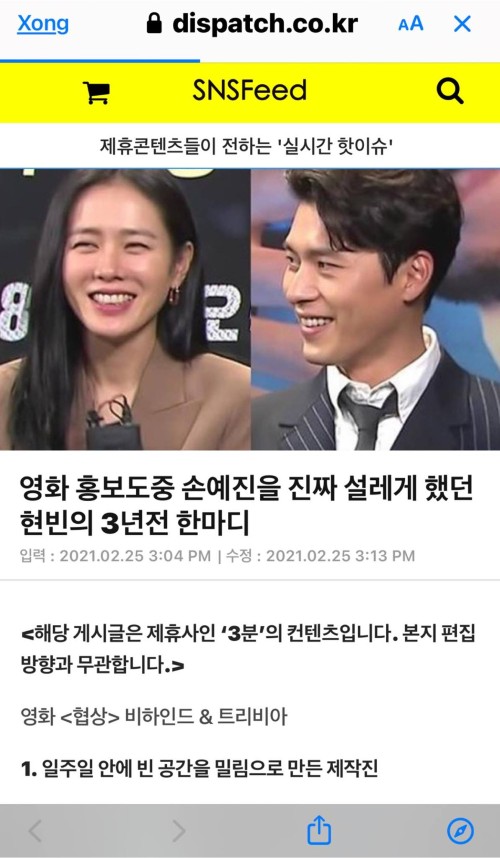 Here is the title of Dispatch’s post on February 25:
“A sentence by Hyun Bin 3 years ago made Son Ye Jin’s heart flutter during the promotion of the film The Negotiation”
We quote this article that is storming this online community:
“3. Behind the scenes about guns in the movie

-Son Ye-jin felt doubts as she saw Hyun Bin’s shooting posture while handling various bodyguards leisurely with an air gun. She herself said she had a real shot, and she had back then backed her back due to her recoil, so she actually asked if she could shoot like that, she says. At that time, she mentioned that the response of the director and Hyunbin was possible enough, saying that the shock of the reaction could come differently depending on her shooting posture.

-Afterwards, there is a scene where Hyunbin, who handled all the bodyguards himself, puts his gun to his mouth to be quiet towards the hostages. In the end, it was a scene that was an error in the movie.

4. Hyun-bin and Son Ye-jin finally met until 5 am

Min Tae-gu takes Hyeon Soo-seok and other military and lawmakers hostage. Only then comes Ha Chae-yoon (Son Ye-jin), who figured out his location, and tries to calm Min Tae-gu.

It was the scene where Hyun-bin and Son Ye-jin, who played live on monitor Lee-won, met on the set for the first time. It was a nice reunion, but the time the two met was 5am.

The two were tired of shooting in the morning and afternoon because they were filming for a long time, but thanks to the happy meeting, they were able to withstand it.

5. “Why are you swearing so well?” The audience’s question that made Hyunbin and Son Yejin explode

-Interestingly, the fact that Hyunbin is a gentleman who does not swear in real life and in meeting people. Is said to have been brought in.

-Later, at a GV event with the audience, a fan asked Hyun-bin, “Why is your brother so swearing so well?” At the GV event, the questions were so unexpected that they kept the two actors laughing. In the video below, you can see the friendly atmosphere of the scene at the time.

6. A word from Hyun-bin that made Son Ye-jin really excited at the time of promoting <Negotiation>

When they were interviewing SBS’Midnight Entertainment’ to promote <Negotiation>, they were asked why they were loved for so long. Son Ye-jin, who was briefly confused by her unexpected question, saw her Hyun Bin and sent her glance to ask for help.

At this time, Hyun-bin only said “because she is pretty…” about the reason Son Ye-jin is loved, but after that, she showed Son Ye-jin smiling as if she was happy, creating her warm atmosphere. Later, as Hyunbin and Son Yejin started dating in earnest, this interview scene became a big topic.

In the words of Hyun-bin, Son Ye-jin’s happy smile shows that the relationship between the two at the time was very good, and Hyun-bin unintentionally reveals her sincerity toward her Son Ye-jin. “