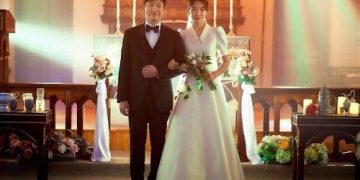 “Sisyphus: The Myth” is currently taking Asia by storm because of its fascinating content. Right after the first two episodes aired Sisyphus: The Myth has captured the hearts of fans and made them want to continue watching the next episodes.
On last Thursday, the second episode of Sisyphus: The Myth gave a very special detail that is the wedding photo of Park Shin Hye and Cho Seung Woo, which makes viewers curious to see what happens. according to its.
“Sisyphus: The Myth” is a fantasy-mystery drama starring Cho Seung Woo as Han Tae Sool, a genius engineer . Park Shin Hye stars as his savior Kang Seo Hae, who comes from a future that has fallen into ruin due to a war.
Han Tae Sool’s world falls into chaos after a plane crash that forces him to face unbelievable truths. He used to think the plane crash was caused by a bird, but the real cause was a suitcase falling from the sky and his dead brother, Han Tae San (Heo Joon Suk). Unable to believe his eyes, Han Tae Sool searches for his brother’s evidence, but continues to encounter mysteries.

They started out as a film camera that his brother had with him. After developing the movie, it was revealed that it had photos of a future Han Tae Sool. One of the photos shows him at a conference in Busan called “Quantum and Time”, scheduled to take place two days from now. But the photos then continued to become unfamiliar, including a photo of a wedding with a woman he had never met.
The production staff stated, “There are a lot of mysterious clues sprinkled around in ‘Sisyphus: The Myth.’ If viewers keep in mind that Tae Sool and Seo Hae are trapped inside the myth of Sisyphus, who is destined to repeat his fate without end, then it will be easier to analyze what happens next. Please look forward to what direction Tae Sool and Seo Hae’s relationship will go after the discovery of the wedding photo.”