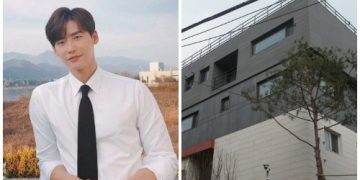 Lee Jong Suk was recently revealed by the media that he decided to sell the building in Hannam-dong that he bought nearly three years ago.

It is reported that Lee Jong Suk bought this building in March 2018 for 3 billion Korean won (~ US $ 2.68 million). He then repaired it and found it to be a shopping mall .

Meanwhile, Lee Jong Suk will return to the entertainment industry this year after being discharged from the army on January 2.