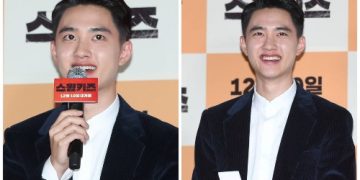 EXO’s D.O. Recently communicated with my fans through the V Live!

On the 26th of EXO’s D.O. has unexpectedly livestreamed on the V Line platform and he answered various questions from fans and gave updates on his plans for music and acting activities in the future.

He started off by saying, “Hello, I have safely returned from the military. I really want to thank everyone for waiting for me. ”
D.O. shared future plans for his acting career. He said, “I’m filming a movie called‘ The Moon ‘(tentative title). I can tell you the details yet, but really fun. So I hope everyone looks forward to it. ”

Then he mentioned his music career and shared, “Personally, there were many things I wanted to do while I was in the military. I tried learning how to play the guitar, but honestly, I was too busy cooking to practice it a lot. But I’m going to try it again, so I’m taking lessons now. I also want to share music with you, so I’m earnestly planning for that. ”

D.O. also talked about his solo album. He said, “I’m working hard on it. The songs are ready, and I am working on the lyrics. Once the lyrics are done, I’m recording the songs and let everyone hear them. ” When a fan asked when the album will be ready, he replied, “I’m not sure. It will be out when all complete. I’m doing my best to hurry up and release it. “