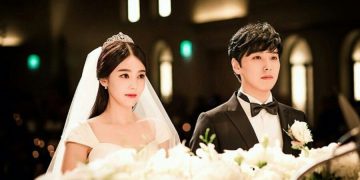 Kim Sa Eun tried to reveal the reason why she and Sungmin were still unable to give birth to children at this time.

In particular, a fan sent her a question on Instagram that she is often asked: “Excuse me, but I wonder when you will be having a child“.

According to Kim Sa Eun, she will probably never have children in the first place, explaining how she believes it is not necessary to have children right after getting married.

“I don’t think I’ll have a child at all, but I think I’m like that way. You don’t need to have a child right after you get married. We have our own lives, even though we became a married couple. ”

From the beginning, there weren’t many opportunities for the couple to get married. Sungmin not only enlisted in the army right after their wedding, she also started her YouTube channel right after his return. She continued to share:

“There were ups and downs. My husband went to the army three months after we got married. He was there for two years and then another year. I didn’t want to have a baby right after he came back, so I started YouTube and got so busy. I happened to set things aside somehow. ”

Anyways, since I had work and my husband had work, I thought I had to work for now. Some of my friends forced themselves to think that they have to get married quickly or have a baby as soon as possible. I think you need to. I think there’s a right time.

Nonetheless, she thinks it is still important to regularly visit the doctor: “Instead, I got checked up really hard. Even though you’re not having a child right away, I think necessary for us to get regularly checked up at the maternity clinic “.