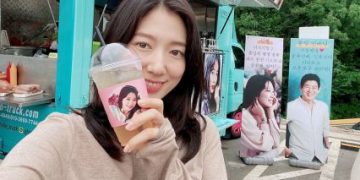 Park Shin Hye recently shared a picture of her posing happily next to the coffee car she suddenly received from Lee Sung Kyung.

Park Shin hye is close to her due date, she and Choi Tae Joon together go on a date and enjoy Dakgalbi in Chuncheon city.

Today on her personal Instagram, Park Shin Hye showed a picture of her standing next to the coffee car that Lee Sung Kyung sent to Sisyphus: The Myth Film Studio to support and care for Park Shin Hye’s close friend yourself.

Park Shin Hye has recently created a craze across Korean cinemas due to his collaboration with actor Yoo Ah In in the movie #ALIVE. Park Shin Hye is currently filming for an upcoming JTBC drama titled Sisyphus: The Myth.
Park Shin Hye was in for a surprise from her Doctors’ co-star Lee Sung Kyung when she walked into the sets to film.

She shared a picture of a coffee truck she received from the actress. “Even before we started filming, Lee Sung Kyung supported me through prayer and now she’s sent a coffee truck! Your support has even gotten the rain the stop, right?” she captioned the photo.
The gift came along with a banner that read, “I support Sung Dong Il and Park Shin Hye, whom I love. Good luck to ‘Sisyphus’!.” Another set of banners read, “Park Shin Hye, don’t get hurt and have fun filming. I’m totally praying for you and supporting you, you know that, right? I love you,” and “Sung Dong Il, I love you. Good luck to Cho Seung Woo, Tae In Ho, and everyone at ‘Sisyphus’!”
Park Shin Hye and Lee Sung Kyung became close friends after working together on Kdrama ‘Doctors’.