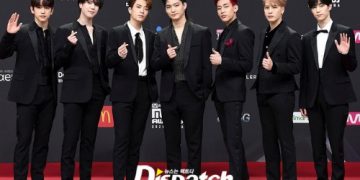 On January 10, Dispatch caused shock with the news that all 7 members of GOT7 will leave JYP Entertainment.

ADVERTISEMENT
BREAKING- Dispatch announces GOT7 Break-up, all members are leaving JYP.
On January 10, Dispatch caused shock with the news that all 7 members of GOT7 will leave JYP Entertainment.
According to Dispatch, the members of GOT7 could not agree with the contract terms to stay in JYP, they decided to leave JYP. However, an industry source said, “GOT7 members are very close. They agree to stay together, but they disagree on their company choice. After many discussions with the company, they decided to break up ”.
Previously, Dispatch said that Jinyoung had completed final discussions to sign a contract with actor agency BH Entertainment, while Yugyeom was also negotiating to join AOMG. According to the report, Youngjae was searched by Sublime Artist Agency, where Song Kang Ho, Rain, EXID’s Hani, etc. JB is said to have received an offer from a famous hip hop label as well as a global music label and is planning to find a place that can support him as a solo artist.
Dispatch also stated that Jackson will continue his global activities through his own company Team Wang, and that he will carry out his activities in Korea through his own agency. BamBam is said to also balance its Thai and Korean activities. As for his activities in Korea, he will receive the help of a content production company and he is said to be in talks to sign a contract with MakeUs Entertainment.
According to Dispatch, Mark will return to his hometown of Los Angeles, USA to spend time with his family, then he will open a YouTube channel. He is considering solo music activities in the United States. An acquaintance of the group revealed that the members all love each other and want to be a group. Although in different agencies, they agree to spend time on activities together when GOT7 reunites.
Update: Immediately after Dispatch published the news that the 7 members of GOT7 have not renewed their contracts, JYP responded: “It is very difficult for us to confirm this”. JYP side said that they are still in the process of discussing contracts with the members. After the final results are available, the company will make an official announcement as soon as possible.
Source: Dispatch
Tags: Dispatchgot7GOT7 Break-up
Share1084Tweet678Pin244