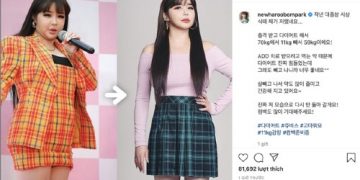 Park Bom shared that she has lost 11kg after trying to diet. Park Bom’s weight loss made netizens stunned.

In recent years, Park Bom (former member of 2NE1) has often become a topic of controversy on Kpop forums because of her chubby body. Korean media believe that she has serious complications after many cosmetic surgery. At the same time, according to the female singer, because she takes medicine to treat the disease, it is difficult to control her weight. But recently, she surprised people when showing off a new photo with a slim body.

This morning (January 4), Park Bom shared on her personal Instagram a photo of when she was fat and swollen with a photo with a slim body, along with the announcement that she had lost 11kg. The former 2NE1 member wrote on his personal page: “Last year, at the Grand Bell Awards I looked like this”. The female singer’s weight loss series even climbed to No.1 on the Dispatch news site this morning (January 4). It must be said that Park Bom is much prettier, her body transformed so beautifully, she lost weight, making fans unable to remember the peak visual of the new debut of the female singer.

“I was in shock and I started a diet to lose weight. Thanks to that, I lost 11kg from 70kg to 59kg. Since I had to take ADD treatment (attention deficit disorder), the real diet. It’s very difficult, but the feeling of losing weight is really great. Now, I have lost a lot of kg, take less medicine and am very healthy. I won’t let myself go back to the chubby version again. Also, please wait for my return “- shared female singer.

The female singer’s announcement made fans extremely excited. Just a few days ago, fans were extremely worried about Park Bom’s future because he was scolded by the manager on the livestream. At that time, many people thought that DNation Company mistreated the former 2NE1 member and forbade her to communicate with fans. Thanks to Park Bom’s announcement, fans are somewhat reassured about her future.