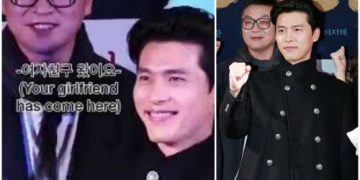 More and more evidence of Hyun Bin and Son Ye Jin dating was released by netizens.

Right after Dispatch confirmed that Hyun Bin and Son Ye Jin were secretly dating,, on a social network, there was a clip that was supposed to reveal Hyun Bin’s true relationship – Son Ye Jin, causing the couple’s fans to “go crazy”. Specifically, this video was filmed in the VIP premiere of the movie “Rampant” – the work that Hyun Bin starred in 2018.

The whole cast stood in front of the series of reporters and it wouldn’t be worth anything if actor Kim Eui Sung from the back didn’t say anything and made Hyun Bin smile shyly. After careful consideration, netizens said that the words “Train To Busan” told Hyun Bin, “Your girlfriend has come here.” It was the moment that Son Ye Jin – the guest of the premiere was appearing on the big screen.

Upon hearing this sentence, Hyun Bin laughed awkwardly and turned to Kim Eui Sung. The person appearing on the big screen here is said to be Son Ye Jin – the guest of the premiere.

This video has caused a huge controversy among Hyun Bin couple fans – Son Ye Jin. One side thinks that this is “proof” that Hyun Bin – Son Ye Jin has been in love for a long time.

The other side said that this situation was incorrect, the person appearing on the screen at that time was Han Ji Eun – Hyun Bin’s co-star. They think that the mouth-to-mouth voice of actor Kim Eui Sung is also not the saying “Your girlfriend has come here.”. Even without the guests appearing on the big screen, watching the cast so Hyun Bin and Son Ye Jin can “face to face” like that. Currently, this is still a controversial topic on social networking sites.