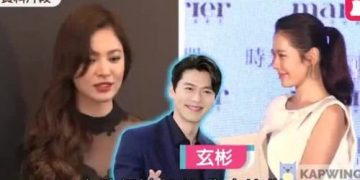 This clip makes fans of Hyun Bin – Son Ye Jin happy, but Song Hye Kyo fans do not like it.

After Crash Landing On You, Hyun Bin – Son Ye Jin became a couple that people actively “pushed the boat”, day and night looking forward to both soon becoming a real couple. Netizens are constantly spotting a series of convincing dating evidence.

This compliment has made fans of crazy couple because in the eyes of Hyun Bin, Son Ye Jin is a great actress. And according to the fan, it is possible that the actor implied that Son Ye Jin is also a wonderful person to him in real life.

However, with many fastidious netizens, this comment is said to be “careless, unintentional” when his former love – actress Song Hye Kyo is also from Daegu. Song Hye Kyo was also called the pride of Daegu, the second most famous star in this city. Hyun Bin’s statement has been commented ignoring Song Hye Kyo.

However, there are also many opinions in favor of the actor, saying that his love story ended many years ago and he simply praised his co-star Son Ye Jin in terms of acting. At the same time, it would be ungainly to mention unrelated characters in another film press conference.

Son Ye Jin and Song Hye Kyo are two famous beauties from Daegu. Both have successful careers, great reputation and are the top goddesses and beauty icons on the Korean screen. Hyun Bin – Song Hye Kyo used to be a cult couple in 2010, but soon broke up after only 2 years. Meanwhile, Hyun Bin and Son Ye Jin officially officially dated January 1, 2021.