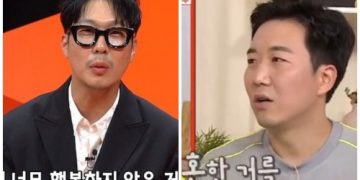 Do Kyung Wan sent resignation letter to KBS , HaHa suddenly started to become the Host of ‘The Return of Superman’!

On January 1, Alllkpop confirmed that announcer Do Kyung Hwan submitted his resignation to KBS, where he has been working for 13 years.

In response to this information, Do Kyung Wan bluntly commented: “It’s true that I submitted a resignation letter. However, nothing about the future is confirmed.”And did not reveal any reasons why he decided to leave KBS.

Soon after, according to KBS on January 1, “HaHa will begin participating as a narrator for ‘The Return of Superman’ starting with this weekend’s broadcast on January 3.”

Meanwhile, announcer Do Kyung Hwan, his wife Jang Yoon Jung and two children Do Yeon Woo and Do Ha Young are loved by audiences everywhere for their happy family image.