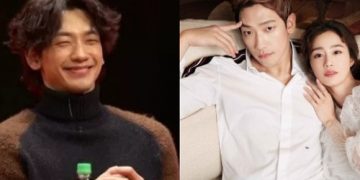 Singer-actor Bi Rain said he and Kim Tae Hee are economically independent, his wife's property is managed by her mother.

Singer-actor Bi Rain said he and Kim Tae Hee are economically independent, his wife’s property is managed by her mother.

In the show My Ugly Duckling broadcast on SBS on December 27, Rain said that since dating, he and Tae Hee don’t care about each other’s money. He handles most of the household expenses. Rain is grateful to his mother-in-law because she helps him and his wife manage their family because they are both busy. The singer praised her mother-in-law for being good, thoughtful, and feeling “blessed”.

Rain praised Kim Tae Hee for being good at cooking, often using the best ingredients for cooking for her family. I like every dish my wife cooks. The actor voluntarily does housework because he is not used to keeping others busy for him, so he rarely gets scolded by his wife.

In the show, Rain revealed that when he got married in 2017, he and Kim Tae Hee agreed to minimize all procedures, the two spent only about 250,000 won for the wedding ring.

Before that, on December 20, on Season B Season, Rain said it took a year to chase Kim Tae Hee because she was not originally in love with him. “From the time I got married, everything was like a dream to me,” said the singer. This year, Rain was active in Korean showbiz, when participating in many reality shows, forming a group with famous artists Lee Hyori, Yoo Jae Suk. Kim Tae Hee also acted in the movie Hi Bye, Mama, after 5 years of absence from the screen.