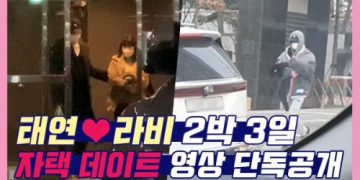 ADVERTISEMENT
South Korean reporter Simple Lee confirmed that Ravi and Taeyeon were dating, saying that they have been dating for 55 hours
Reporter Simple Lee posted a video confirming Taeyeon and Ravi are dating.
While the management companies of the two stars are trying to deny the dating news. Popular reporter Simple Lee was the first to report the dating news, and while her first video was deleted, she went on to upload a second video, in which she said, “I’ll tell you just the facts.I learned of their relationship back in October from an insider who knows them very well.It’s true that has been dating for a year. Their relationship is more than just sunbae-hoobae. They depend on and care about each other. What more do I have to say? They spent the entire time since Christmas to today together. I’ll show you the video of them dating. It’s up to you to decide. ”
She insisted, “They’re both popular celebrities, so they enjoyed their date at home. They were together for 55 hours from Christmas to the 27th. They never left each other’s side.”
Tags: TaeyeonVIXX's Ravi
Share399Tweet249Pin90