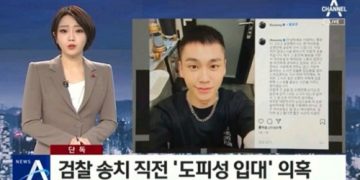 ADVERTISEMENT
BTOB’s Ilhoon was arrested by the police for using marijuana: Career is over!
Cube Entertainment has released a statement confirming that BTOB’s Ilhoon is under investigation for suspicion of using marijuana.
According to an exclusive report from Channel A on the afternoon of December 21, police received acquaintaince statements and used account tracking to confirm the idol had smoked marijuana with his acquaintances several times from four to five years ago to last year. Drugs were also detected in hair tests. Police also have secured circumstantial evidence that Ilhoon purchased marijuana with virtual currency rather than cash to avoid tracking.
Currently, Ilhoon is performing his mandatory military service after enlisting in the army in May this year. Initially planned to enlist in March but was delayed due to the Covid-19 epidemic. Besides, Channel A questioned whether his enlistment time is related to the investigation.
Before the above report, the representative of Ilhoon’s Cube Entertainment management company shared with Channel A: “We have no idea about Ilhoon having a drug scandal. He was initially scheduled to join the military in March, but his term was delayed due to COVID-19. ”
On the evening of the same day, Cube Entertainment released the following official statement: “Hello, this is Cube Entertainment. We checked with Ilhoon for today’s news and confirmed he was summoned by the investigative agency. Currently, Ilhoon is under investigation for suspicion of using marijuana as previously reported. We feel a deep responsibility for causing concern to so many people. We will do everything necessary for him to honestly report, obey the ongoing investigation. Once again, we would like to apologize for causing concern for so many people. “
Tags: BTOB's IlhoonPark Yoo Chun's ex-girlfriend
Share245Tweet153Pin55