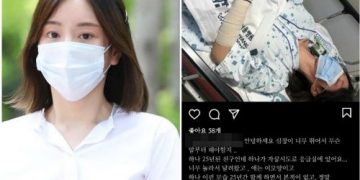 Park Yoo Chun’s ex-girlfriend is in emergency hospital after suicide!

Park Yoo Chun’s ex-girlfriend is said to have been hospitalized after attempting suicide.

On December 18, a longtime friend of Hwang Ha Na posted a post on her Instagram on her behalf with a photo of her in the hospital. In the caption, she wrote, “Hello, my heart is racing so I’m not sure how to start this post .. I’m Ha Na’s longtime friend and she is currently in the ER after attempting suicide … I have never seen her in this state over the past 25 years, so I’m very upset and frustrated … She did not deserve this. There is a man with the last name Oh repeatedly brought up in her suicide note. I think you ‘ll read this post as well. Please don’t kill Ha Na … Leaving malicious comments is comparable to murder. Mr. Oh * *, please save Ha Na ”

Earlier on December 17, Hwang ha Na shared a self-harm photo on her Instagram.
In addition, Hwang Ha Na and Park Yoo Chun announced their marriage in 2017, but they separated in 2018. In the past, Hwang Ha Na has repeatedly come to court on charges of buying drugs while dating. Both Park Yoo Chun and Hwang Ha Na received 2 years of non-custodial probation from the court.