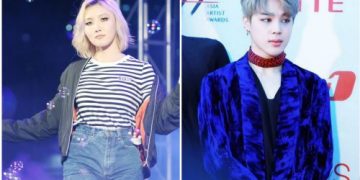 The online community was shocked when it was revealed that Jimin BTS and Hwasa were a secret dating couple that will be revealed by Dispatch on January 1, 2021.

Normally, Dispatch will publish the dating evidence of a celebrity couple on the 1st of the year, so every January 1 of the year, fans are anxiously waiting for the results.

Recently, two mysterious Twitter accounts @ okt179th and @kordisoatch have suddenly posted 2 identical posts with the content listing 3 Dispatch couples that will be exposed in 2020, in which the couple Jimin BTS and Hwasa MAMAMOO Twitter immediately rioted.

As soon as the post was discovered, the keyword JIMIN AND WHO immediately climbed to the top of Twitter trending and was continuously tweeted at breakneck speed.

As the current top group, all news related to BTS’s personal life will surely attract great attention from the media and netizens around the world, especially if it is dating news. the more lucrative it is for the media.

However, many fans believe that these 2 posts are just fake news and are just a joke to provoke fandoms because they are simply a normal listing without any good pictures. any real evidence. Furthermore, both of the current posts have been removed by the owner.