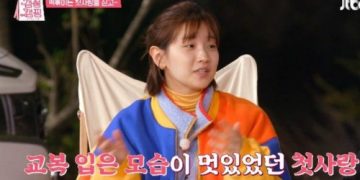 Heartbreaking- Park So Dam has cancer, her agency revealed that she had just undergone surgery for thyroid cancer.

On December 11 on JTBC’s ‘Gamsung Camping’ TV show, Park So Dam made a guest appearance. Especially this is the first time she shares her love with the audience.
During the conversation, Park So Dam said, “”When I was in middle school, I liked this guy at my school. I didn’t know his name, so my close friend and I used to call him, ‘school uniform guy’. He looked amazing with the school uniform on.”

She continued,”One day, I received a text message from a random number. It turned out to be ‘school uniform guy’. He apparently had asked one of my friends for my number.”

She continued, “After talking for a while, we ended a date. After dating, he told me he didn’t want to see me anymore.”
“When asked why, he said, he planned to go to a foreign language high school, so he wanted to focus on his studies. But you know what? He failed to go to one.”

The actress continued, “But the funny thing was, I couldn’t get over him. I asked him out three times over the course of two years after he first ‘dumped’ me.”

She added with a laugh, “I cried every night listening to GUMMY’s ‘If You Come Back’. I used to think there was no one else for me except him. Now it’s all a good memory.”