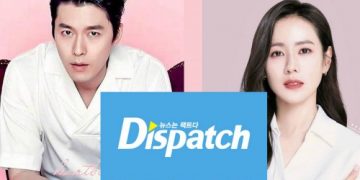 Will Dispatch join in 1/1? Will Hyun Bin and Son Ye Jin be exposed to secret dating by Dispatch?

Will Dispatch join in 1/1? Will Hyun Bin and Son Ye Jin be exposed to secret dating by Dispatch?

Will Dispatch join in 1/1? Will Hyun Bin and Son Ye Jin be exposed to secret dating by Dispatch?
Lately, there have been quite a few rumors about ‘Dispatch Couples’ circulating online!

Quasi-traditionally, the media outlet ‘Dispatch’ has always revealed at least one new celebrity couple each year on New Year’s Day. As such, it has become somewhat of a sub-tradition among certain fans to predict which couple(s) will be revealed next year.

This year, we can look forward to the new couple to be revealed in 2021, Hyun Bin and Son Ye Jin are currently one of the couples that fans Hope to be Dispatch’s opening on January 1, 2021
Will rumors come true?
Hyun Bin and Son Ye Jin are really Asia’s most popular couple, before many rumors that they are about to get married after years of secret dating. Recently, they reunited once again to send their greetings to Japanese fans on the Netflix platform.
This makes fans always look forward to a truly beautiful ending for them.